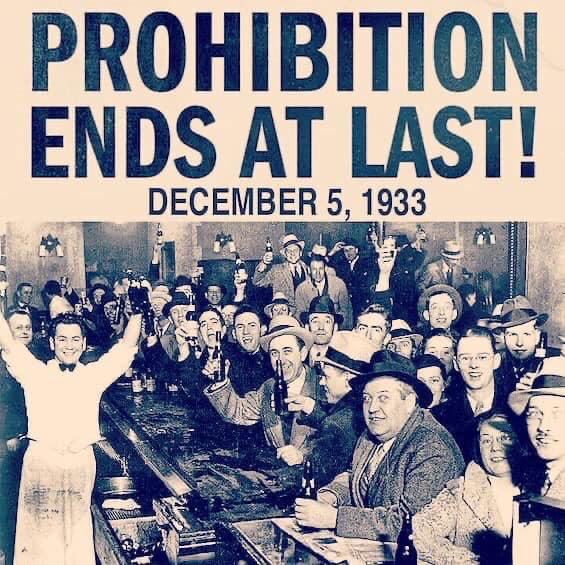 Conyers, GA—Every year on December 5th there are celebrations nationwide in honor of Repeal Day. This distinct recognition is for the end of the infamous 14-year ban on making, selling, and distributing alcohol.

Aside from ending prohibition, the 21st Amendment gave the authority of alcohol laws to the states to establish regulatory agencies and rules including age limits, closing hours and etc. in an attempt to control the consumption of alcohol. There were even “public safety and health” regulations focused on increasing the quality of alcohol to make it safer for consumption.

There are many reasons why prohibition failed, but a major contributor was the simple notion that the welfare of members of communities was never a focus, thus creating a tremendous amount of apathy from all forms of authority. The enforcement of the law was such a joke there was a nationwide competition to create a new word for “the lawless drinker.” The winning entry compounded the words of scoff and law for “Scofflaw”. Its original meaning was someone who mocks or ridicules anti-drinking laws and remains a symbol of the Prohibition era. It has even extended to mean one who flouts any law, especially those difficult to enforce, and particularly traffic laws.

A second reason was the response by the same women who actually demanded Prohibition. For example, a mother who pushed for prohibition out of concern for her two sons soon realized they had no regard for the Prohibition laws, as did very few of her friends. She asked: How will her sons grow up with any respect for any rule of law, especially one in the Constitution, the basic document of American government that is being violated openly on a daily basis?

The concerns of that mother are still relevant today. A 2018 Congressional Report observed that parental attitudes and perceptions about drinking have shown to be very important influences on underage drinking. Additional studies find that parenting practices including monitoring, communication, and emotional support have a positive effect on adolescent alcohol use and are predictive of reduced adolescent alcohol problems. But the level of this happening is not very high.

History demonstrates repeatedly laws can provide structure, guidance, and authority with success. But with this success, society believed a generational change had occurred causing a push to relax laws regarding alcohol. This phenomenon resulted in 29 states lowering the drinking age from 21 to 18 years of age. Subsequently, there was a significant increase among teens experiencing more traffic injuries and fatalities creating the need for 24 states to retreat by returning the minimum age back to 21.

Since all states could not agree on a standard age, Congress enacted the National Minimum Drinking Age Act of 1984. To ensure states acted accordingly, the threat of reducing federal highway funds to states was utilized resulting in all states establishing the age of 21 by 1987.

In addition to the minimum drinking age, Congress passed franchise laws to ensure control and access to alcohol brewers by instituting regulations requiring approved distributors. The use of distributors ensured that retailers and consumers were provided a choice, fair pricing, and product safety. The desire was for the independence of the distributors would help hold the alcohol industry accountable and fair, but when it came to the issue of health…the focus was on “healthy competition”…not the welfare of the public.

The initial question is: Do new laws and regulations have a positive effect? The simple answer is: YES. An example is the effect suffered in the United Kingdom (UK) when they aggressively reduced regulations associated with alcohol. Within a year, the UK experienced a health crisis with hospitalizations for alcohol abuse doubling, underage drinking rates increasing by 100% more than the US, and the simple observation of total loss of control… (The argument utilized in 1918 for the passage of prohibition.)

The second question is: What is a key factor in a community experiencing a positive effect with alcohol laws and regulations? The answer is Consistent Enforcement. While enforcement varies nationwide, research has supported the finding that reducing access to alcohol has a significant effect on mortality rates, particularly for young adults, and reduces the rate of non-fatal injuries.

The last question is: Do we really need laws to ensure good behaviors or sense? The answer is: Sadly, our communities do. At the end of prohibition, it was President Franklin D. Roosevelt’s desire in a proclamation:

“…declaring the end of Prohibition while also admonishing the country to drink responsibly and not abuse “this return of individual freedom.” “I trust in the good sense of the American people,” the president said, “that they will not bring upon themselves the curse of excessive use of intoxicating liquors, to the detriment of health, morals, and social integrity.”

But history demonstrates this has not been achieved and citizens need guidance… with laws and regulations. And if society is going to have laws and regulations, they have to be enforced or they will be viewed as SCOFFLAW… resulting in more vehicular homicides, accidents, and a rise in underage consumption that only leads to more issues in the future.

So, celebrate, remember, and learn from the failed Prohibition Law. But do so in a manner that will increase the safety and quality of life for all communities.